In recent years, Phong Nha Ke Bang National Park Viet Nam has been becoming one of the top travel destinations in the country. However, many people haven’t hear about the Park or if the have, it’s just about the cave. Hue scooter rental would love to  help you explore this amazing lanscape. Together we will discover more about other hidden beauties and facts of Phong Nha Ke Bang. How was it formed? What to see in the Park and Which values that make it to be a World Natural Heritage? 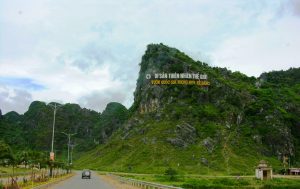 The Park is the oldest and largest tropical karst which formed 400 million years ago.  During the main geological periods of the Earth, it had the original topographic and geologic characteristics. This was the home of many ethnic minorities and ancient people. The scientist have found out the traces of hieroglyphics of Cham- an old Kingdom in the country. They lived here during 9th-11th  century and left behind the values of cultural features. Also, Phong Nha Ke Bang national park was a shelter of Viet Nam solders during the fierce War. They used the caves as hospital, roads for transfer foods and weapons. Indeed, the Park is not only famous for natural beauties but also for the historical sites remaining till present.

One of the main factors to recognized Phong Nha Ke Bang national park as World Natural Heritage is biodiversity. It has the total area of 343.300 hectares, of which the core is 123.300 ha and the buffer is 220.000 hectares.  At here, we can see the appearance of primitive tropical forest which cover more than 96.2% and features a great biodiversity. In this area, thanks to the data of scientists survey, many endemic plant species of the limestone forest have found. Cho nuoc (platanus kerrii), Cho Dai Nghien (Burretiodendronhsienmu), Tram Huong (Agarwood) are the famous species. There are 38 species are listed in the Viet Nam Red Book.

Scientists also discovered many rare plant species in danger of extinction such as the Calocedrus rupestris, paphiopedilum spp and many other rare plant species. Regarding fauna, 140 mammal species have been identified, 35 species are listed in the Vietnam Red Book. Compared to other conservation areas and national parks in Viet Nam, the abundance of the animal species in Phong Nha-Ke Bang National Park is higher. The rare species, especially primates have been found with the highest number of the country.

Phong Nha – Ke Bang  is truly the “Kingdom of the cave”. As researched, they estimated that there are more than 300 multi- shapes caves in the National Park and many of those are now still untouched. Almost the caves bring the unique and spectacular beauty of the limstone area. More, the multi-shape and different sizes of the caves creat a mysterious feel for those who explore. We would love to show you the most famous and beautiful caves of the Park: 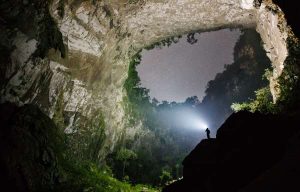 From April to August is the dry season, the temperature outside is 36, 37 degrees and inside the cave is only 20 – 21 degrees. As a result you can visit all the caves here easily.
From September to March next year is the rainy season. The water level from rivers rise and cover cave entrances which are hard to do any cave tours here.