Hue- ancient city has been being well-known for both cultural and natural beauty not only in Viet Nam but also all around the world. In fact, it would be a deficiency if you don’t know what to do and where to go when visit this world heritage. Hue scooter rental would love to give you things to see and do for the most famous destinations of Hue attractions which help make your day in Hue more significant.

Hue city is a place that contains many beautiful and meaningful constructions, modern and even ancient ones. Among those, the Citadel presented for an old Hue in Nguyen Dynasty- the last feudal dynasty of Viet Nam. As recorded, the construction began to build in 1805, in the rule of the first King of Nguyen Dynasty Gia Long. With an aim to make an imperial seat of government, a place for protecting King and mandarins and for meeting and perform national ceremonies, the citadel was being monumentally built within years. 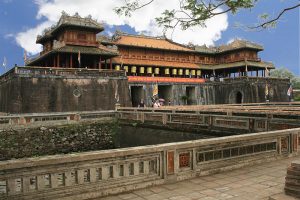 It was compared to the Forbidden City in Beijing but actually there are many differences between those. Also, the Citadel has been through many events especially Viet Nam wars in the past. From 1947, it has been attacked and damaged many times. The fact is just few of the interior structures were still integrated and the remaining constructions were not conserved as its origin. Then the Citadel was ignored because its existence presented for an embarrassing vestige of imperial rule. Within recent 20 years, perceiving of potential tourism it brings to, Viet Nam government has made effort to rehabilitate the old Citadel. In fact, if you ask someone of the most impressive thing in Hue, almost answer is the Citadel, the highlight of Hue attractions.

It will take a full day to visit the tombs and pagodas in Hue. With the effect of Buddhism towards lifestyle of Hue in ancient time, many pagodas were built. Also, at this time Kings of Nguyen Dynasty have started to build their own tombs as a plan after the death. In fact, driving by or get along romantic Perfume River, you will be surprised by large, unique, monumental architecture of tombs here. At the tombs, you’ll see patios loaded with stone elephants, stallions, and mandarins. You’ll discover structures, sanctuaries for worshiping the ruler’s spirit, and tributes. The vast majority of the tombs were arranged by the ruler himself, so every regal tomb reflects the identity of the expired ruler.

The most famous tombs in Hue are Minh Mang, Khai Dinh, Tu Duc, Dong Khanh, etc. Especially, Minh Mang Tomb was built in 1843, with the area of 18 hectare, 3-meter-high defended wall, and nearly 20 architectural constructions. Another one is Tu Duc Tomb which is located in the middle of a pine forest with beautiful scenes of land, sky and condition.

For the pagodas, Thien Mu Pagoda is the most famous and biggest one and has become a highlight part of Hue tourist attractions. With the symbol of the octagonal 21-meter-high tower, the pagoda is the perfect combination of artificial architectural work and picturesque nature. Also, it itself brings to tourists the mysterious stories about love and history of building. Tourists can also visit other pagodas such as Tu Dam, Tu Hieu, Huyen Khong.

Perfume River is considered as one of Hue top attractions for tourist. Ever when we mention to Hue, the river is the first thing to remind of. The river is located in the middle of Hue and separates the city into North and South parts. It seems like a life source proving and keeping the soul of Hue city. Driving by along the river a take a cruise boat trip, you will have chance to immerse your soul in fresh cool winds, enjoy local life style, admire beautiful scenes of the city. Moreover, the river has been through many events and witnessing the changes of locals for years. Many poems and songs are composed for the beauty, the pain and the inspiration which Perfume River gives to. In fact, the feel of walking through romantic bridges, watching the color of lights along river changes, enjoying the twinkle stars above sky make you want to become a poet!

Located in the coastal middle Viet Nam and in a multi –terrain area, that’s the reason why you can find out many rivers, lake, lagoons and beaches in Hue. As recognized by famous newspaper and magazines, Lang Co is one of the most beautiful beaches in the world. Besides, Thuan An and Hai Duong beaches are the ideal ones for those who love to have a wild-long Hue motorbike countryside tours . What could be better to be with your beloved friends on convenient Hue scooter rental  to explore the hidden beauty seashore, enjoy sea foods which made by locals, hunting for the best photos.

Also in Hue, you will have chance to admire Tam Giang Lagoon- the biggest lagoon in the Southeast Asia. Simply gentle as river, big as sea when describes about this lagoon. Here also you can discover the local life style by taking part in their life activities and chatting. Absolute a highlight for discovering on the way Hue Hoi An top gear tour besides Hue attractions.